What was most enjoyable about the “Kids Dance Outreach 2019 Event of the Year” Tuesday night was the astounding vitality and exuberance of the 75 children who were featured in the dance performance with the theme of “Hold Fast to Dreams.” Staged at Howard Schrott Center for the Arts on the campus of Butler University, the sold-out event showcased the young dancers, ages 8-11, in a ultra lively program that celebrated the 100th anniversary of the Harlem Renaissance. 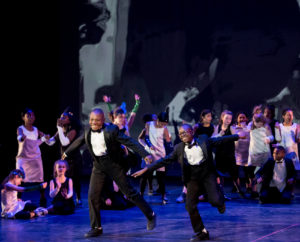 The mission of Kids Dance Outreach (KDO), founded in 2012 by former Boston Ballet dancer Michael J. Johnson, is “to positively impact the lives of all children through joyful dance programs that inspire excellence, install confidence, encourage teamwork and applaud persistence.” It serves 2,000 students attending Indianapolis public and charter schools. Different from a dance studio, KDO’s most important feature is its accessibility. Classes, taught by master teachers and musicians, are free for all children, regardless of ability, economic status or religion.

Dancing to live music performed by an eight-piece band of seasoned musicians, the super-talented KDO performers were dazzling as they executed, in some cases, very complex choreography, much of it created by Johnson, KDO associate director Monica M. Muñoz and lead teaching assistant Courtney Coirin.

Additional choreography featured in the concert was created by Ellen Weinstein, artistic director of the National Dance Institute in New York City. Weinstein and NDI founder Jacques d’ Amboise, a former ballet dancer and legend in the dance world, were both present for the event. Prior to the concert, they participated in a panel discussion with Johnson for a VIP audience. KDO became an Indiana Associate of the National Dance Institute in 2018, one of a dozen in the country. KDO’s association with NDI is quite a feather in the cap for Johnson and his colleagues, considering the organization’s high profile, as was D’Amboise’s and Weinstein’s attendance at the event.

There is so much to praise about the concert, but for purposes of brevity I will highlight those moments that most caught my attention and there were many.

First of all, I wish to single out Leilani Hendrix, who served as the program’s narrator. Showing remarkable poise and confidence, she reflected a maturity way beyond her years, as did young Darrel Watson who recited, respectively, “I, Too,” and “The Dream Keeper,” two Langston Hughes poems near the open and close of the concert. Adding to the show’s high entertainment value was soloist Troy Thomas, Jr. who sang “Minnie the Moocher.”

I do wish to emphasize that, at times, I could not believe my eyes, as the kids, showing impressive discipline and control, danced in total sync and executing the kinds of combinations and formations that are common in musical theatre choreography. Also amazing was their musicality, with many of the young dancers conveying buoyant personalities.

Featuring choreography that mirrored large musical theatre production numbers, the dancers shined in “The Big City” set to music by Irving Berlin, George Gershwin and Duke Ellington and the “The Cotton Club & The Nicholas Brothers,” featuring Thomas Campbell and Jeremiah Bolden, who turned in phenomenal performances as the legendary, tap-dancing siblings. Featuring KDO standout Jasemine Bolden as “Tenant” and Keegan Loye as “Cop,” the kids delighted an enthusiastic audience in “Rent Party.”

In lieu of an intermission, KDO held a “Find a Need Auction,” which was overseen by auctioneer Jay Cash. Donors held up numbered cards as poignant photos of KDO dancers by Jenny Danek were projected on a large screen above the stage. A whopping $29,000 in pledges was collected in less than 20 minutes.

Highlights of the concert’s second half were “Black Bottom,” which featured KDO’s X-Team, which also wowed the crowd in “When the Saints Go Marching In.” Absolutely moving was “What a Wonderful World,” featuring Karlee Rund & Phoebe Reese, accompanied by projected images that portrayed KDO’s racial diversity, a key component of its mission.

Since attending the concert, I have reflected deeply about the event’s possible impact on the kids who performed and my experience as an audience member. To successfully perform and receive the love and adulation of an adoring audience, with many parents and families in attendance, must truly have been a life-changing experience the KDO kids will never forget. As far as its impact on me, seeing those innocent, fresh-faced, totally guileless young kids expressing themselves left me feeling optimistic that through their passion, commitment and creativity, they’ll help make the world a better place than the one they have inherited.Adding to the elevated quality of the concert, which was KDO’s first professionally produced presentation, were its top-notch production values, as evidenced by the lighting design created by Laura Glover, who works her magic regularly for Dance Kaleidoscope, Kathleen Egan’s costume design and tech-video contributions from Jeff Gooch, and production managers Abraham Sheckels and Kelly Schmidt.

Want to join the discussion?
Feel free to contribute!